The Importance of Leadership in Sports 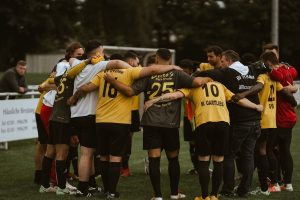 A leader isn’t always the obvious person. Someone can have technical skills and yet have no leadership skills while someone else can rise up with no formal leadership training and carry the day!

Nothing separates a leader from a pretender like the high-pressure, high-stakes arena of competitive sports. You can have talent. You can have skills. But having both and being able to lead a team is a rare quality indeed.

What goes on behind the scenes? What kinds of managerial styles and qualities do you most often find in a winning team’s leader? As usual, Big Al has the answers!

No, not the NFL, MLB, and NBA, though the confusion is understandable. We’re talking here about Autocratic, Democratic, and Laissez-Faire leadership styles. Let’s take a look at each one and their pros and cons.

An autocratic leader is no fuss, no muss, no backtalk, just getting the job done as fast and efficiently as possible type of person. It sounds great, but the trade-off is that teammates may feel left out of big decisions and opportunities for more responsibility.

This style of leadership makes decisions with player input. This fosters trust and motivates each player to do their best for their fellow teammates. It might not be the wisest choice if the clock is running down, though.

This can be thought of as a “hands-off” approach to leadership, which may be great when a team is a well-oiled machine but can also backfire. In the absence of stable leadership, the players can lose morale and turn on each other.

Many leaders will show all of these qualities at different times. Sometimes an autocratic style puts that last desperate point on the scoreboard. Sometimes a democratic style brings the team back together if morale is low. Sometimes the players need to be trusted to make their own choices with laissez-faire leadership. A great leader can constantly adapt to every situation effectively!

Top of the Ninth

Think we’re done talking about the importance of leadership in sports? Not even close! Let’s quickly tackle nine of the qualities that make for a great leader.

This is no time for “do as I say, not as I do.” To get the best out of a team, a leader must embody the best traits and values of that team. A bad attitude, casting blame, or cheating sets the tone for everyone else.

A great leader knows how to read a room. A team looks to its leader for support both on and off the field. Ripping into the team after a hard-fought loss might not carry as much currency as putting an arm around a player who took that loss extra hard.

Cheerleading isn’t just for the sidelines! Leadership means being a perpetual cheerleader. Ramping up team spirit and keeping the players excited and engaged is a vital component of sports leadership.

This might be the one quality that unites all players everywhere. Once a player has experienced the sweet taste of victory or the bitter bite of defeat, they join all others who’ve had it, too. A passionate leader drives the winner and motivates the loser.

Players will have a hard time trusting a leader who hasn’t “been there and done that.” If a leader brings top-quality chops to bear, a team will feel an urge to follow that same success. Inexperience will quickly erode any leader.

It’s easy to inspire a team when everything is going according to plan. It’s another thing entirely to fire them up when things are looking their worst. A great leader motivates players to do their very best, win or lose.

If a leader can’t state their objectives clearly, there is no chance that the team will be able to accomplish them. They need to know the goals and how to achieve them, expressed in no uncertain terms.

Let’s face it; nobody plays a sport to be on the losing side. While losing builds character in youth sports, every team needs to know their leader is driven to bring that trophy home. Players need their leader to want it just as badly as they do.

We’re not talking about picturing a literal game plan here; this is all about how a leader envisions the success of their team. Do they see their team going to the finals? What about winning the championship? A strong leader’s vision will tie a team together when things are going badly.

A successful leader looks out for their players, guides the team to victory, and leads by example through their own enthusiasm and excellence. Whether they’re a coach or a star player, a team with weak leadership will be directionless, underperform, and have low morale.

The Importance Of Typography – 6 Reasons Why
Naneth Robinson July 18, 2022