Is Fox News an Entertainment Or News Channel? All about fox news 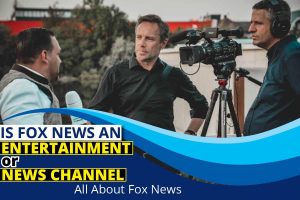 The Fox News Channel is a subsidiary of Fox Corporation. It has always been subject to controversies and allegations. Fox News has faced a lot of criticism from politicians, academics, and watchdog groups for its biased content.

Its critics argue that Fox News practices do not conform to the standards of broadcast journalism. This means it does not follow the media’s doctrines.

Some argue that Fox News does not deserve to be treated as a news channel due to several controversies. The uncertainty surrounding the Fox news category has been a challenge. With many attempting to figure out if it is registered under news or entertainment.

To ease your doubts, let’s answer the question

Is Fox News an entertainment or news channel?

Fox News is a news channel. It is based in New York City. Fox News is devoted to continuous 24 hours delivery of news. It also has analysis and opinion programs, which are aired all night. Because of the nature of its programs, fox news is classified as a news channel.

FOX News has always been criticized because of its poor sourcing of news and spread of conspiracies. The regulatory news rules state that no news channel should distort the news. And that slanting and rigging news is against the public interest.

“So why does Fox News distort, lie and solely promote republican agendas under the banner of news”?

Many believe that fox news is registered as an entertainment channel. And this allows them to bypass numerous ethics and rules set for news stations by the FCC. However, this claim does not automatically make Fox News an entertainment company.

Therefore FCC cannot regulate news content aired by fox news or any other cable network. This is the reason why Fox News continuously airs news that is against the public interest.

Also, in 2019 there was a fictitious article claiming that Fox News changed its accreditation from news to entertainment. It further stated that Fox news had no legal obligations to provide any facts.

This information quickly circulated online and confused Fox news viewers. However, Fox News, through its spokesman, defended itself by saying it was a meme and that its claims were false.

Fox News further argued that there is no existence of a regulatory body that can accredit fox news (CNN, MSNBC, etc.) as a news or entertainment station. While the meme was considered fake, it was someone’s genuine way of expressing his/ her distrust in Fox news content.

In another instance, immediately after Joe Biden’s win. Fox News joined sides with other misinformation media houses, like Newsmax and OAN. Their main aim was to tarnish the elected president’s name.

One night into Biden’s term, the Hannity was already trashing Biden’s disastrous first week. Many felt like Fox News was no longer “free and balanced.” They said that it should stop calling itself a news channel.

They further claimed that the fox does not follow the journalistic procedures in acquiring news. That is a channel that is dominated and driven by opinion. It should, therefore, be classified as an opinion channel.

The new fox corporation was formed in March 2019.  It is primarily a news and sports company now.

It has iconic brands, which are Fox News, Fox Sports, and Fox Television. However, its businesses are reported in the following segments:

It entails licensing and the production of content for sports and news. The content is primarily distributed through the traditional cable system, telecommunication companies, satellite operators, and one multichannel video programming distributor in the US.

It acquires markets and distributes broadcast network programs under the FOX brand. It has 28  broadcast television stations.

It is a news and political commentary channel, founded in 1996. After enjoying success with the larger Fox broadcasting company, Rupert Murdoch thought of expanding his business presence in the American television industry.

He attempted to purchase the then-famous Cable News Network abbreviated as CNN, but his offer was declined. He decided to create a cable network that would revolutionize the US news and cable news channels.

After its creation, the fox had a huge challenge, gaining viewers. It managed to offer competition to CNN, which was already having the upper hand in the news business and was having several million viewers. It also made a huge gain against MSNBC, launched a few months earlier to Fox News.

In 2002 it surpassed CNN in the number of viewers and had managed to stay on top for decades.

However, Fox News has had strong ties with the Republican Party. It has helped in the presidential campaign by pushing always pushing the republicans’ propaganda. Many claims that it airs biased news in favor of the republicans.

Fox News has always been a popular news network and has the largest number of viewers in the USA. It has the most primetime audience.

Having most subscribers during prime time is the dream of every cable network. The prime time subscriptions are used in rating the cable news stations.

News cable networks always have monthly battles—each to have the most viewers. The one with the most viewers during prime time is considered the most successful and is highly rated.

Fox’s rating is always generally higher than its competitors and has always been the topmost channel for watching.

In February, Fox News topped primetime with its number of viewers at 2.47 million. MSNBC came second with 2.19 million viewers, and CNN was third with 1.69 million.

It is that time that audiences are always more interactive. In the US, it is between 8 pm and 11 pm. Television networks air their best programs. Most advertisers use this time to market their products. The number of viewers is always high at this time.

It was an American entertainment company owned by Fox Corporation.  It was founded on March 21st, 2019, by Walt Disney Company. It acquired it from Fox Corporation. The deal was worth $71.3 billion. It currently serves as fox television production arm.

Disney got hold of the dead pool and Fox-owned characters such as the X-Men and Fantastic Four in the deal. It also took ownership of the Former Fox network.

They also got 30% control ownership of Hulu from fox; this meant Disney had control for 60% shares since it already owned 30% before the Fox deal.

After selling most of its entertainment property, fox became a standalone company. It retained the ownership of its other companies such as fox sports and fox news.

Disney’s CEO Bob Iger says Disney bought fox because of its plan to launch a new streaming service. They knew by acquiring Fox entertained they would have flavored their library.

To Disney, the 21st-century assets, including national geographic and The Simpsons was a gem. It would bring a lot of traffic to their channel.

Disney was threatened by Netflix, which was quickly becoming a powerhouse in the circulation of Television and film. They were extra good in the production of content that was so original.

Though, Disney had licensed a lot of their content through Netflix. They felt it was time to stand on their own and compete.

Again Disney is after monopoly. It was the largest media company and had been buying other media assets and intellectual properties.

Many economists argue that it is only monopolies that make extraordinary profits. They knew that by acquiring fox entertainment. They would gain the upper hand in the media business and lots of profits.

This was the bigger and probably the most complicated acquisition deal of one media to another in history.

For fox, it was mostly fear, the opportunity that motivated them to sell most of their entertainment properties.

They feared that some of its partners, like Amazon, Netflix, and possibly apple, would not spend on producing new shows.

They also felt that Amazon, Netflix, and Apple would sell their assets when the Fox entertainment Assets price rises.

Fox News is not entertainment. It is a news channel and the most profitable subsidiary of the Fox Corporation.

It has the most users and is the most popular subsidiary of Murdoch’s media empire, including Fox sports, the fox network. Fox has other subsidiary channels for entertainment purposes like fox sports.

Fox News has been under fire with many people who claim that their news content is not to the right standards. Others even went to the extent of calling it an entertainment company.

Despite the critics, Fox News has still managed to offer solid competition to CNN and MSNBC with the US’s top cable news channels.

Previous Article
What Rockefellers Are Still Alive? The Remnant Of The Greatest Oil Dynasty
Next Article
Why Did John Kerry Lose? The Lost Key To The 2004 Elections