Is North Hollywood Safe? The Truth About NoHo’s Security 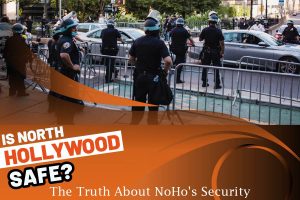 North Hollywood, also referred to as NoHo, is a Los Angeles suburb. It is positioned in the San Fernando Valley. This is a part of L. A that has been thriving in the recent days.

North Hollywood is a diverse neighborhood. It has a lot of arts, people and forms of entertainment. Like any other part of Hollywood, it has a part to play in the film industry.

North Hollywood has some bad histories. There was a time when it was gang riddled. Inevitably there was a lot of violence and shootouts in the streets.

This reputation has made many people question if it is actually safe to live in North Hollywood.

Here is the response to our question

Currently, it is a very peaceful place. It has a lot of good houses that have been well developed. It continues to be safer as more people move in and police presence increases.

North Hollywood was initially part of The Mission of Saint Ferdinand. The government held it during Mexican rule. A group of investors then purchased the south part of the land.

The one leading the purchase was Isaac Lankershim. He was a grain farmer and stockman from northern California. In 1873 the ownership of the property got transferred to Isaac’s son, James Lankershim.

The new managers of the property decided it would be better suited for wheat farming. This project succeeded, and the property (Los Angeles Farming and Milling Company) became the biggest wheat producer.

In 1887 Lankershim purchased 12,000 acres. From this, they started the Lankershim Ranch Land and Water Company. James Lankershim started a townsite whose inhabitants named Toluca.

The townspeople mostly grew deciduous fruits such as pears, walnuts, peaches, and apricots. In 1896, the town’s post office was renamed Lankershim after Isaac Lankershim.

In the early 20th century, the town was called ‘The home of the peach.’ In 1905, the town was officially recognized as Lankershim. All this was before the town was annexed to Los Angeles.

The Western side of Lankershim got annexed in 1919. The rest of the property joined in 1923. Due to lack of water, most of the ranches got foreclosed. Others were transferred to the fruit packing industries.

In 1927, the town of Lankershim’s name was changed to North Hollywood. This was an attempt to tap into the location and glamour of the town. As a result of this, the town got improved and was built into a suburb of L.A.

As time went by, more development and private business projects were added.

Department stores and shopping centers such as the Valley plaza got built. It was the second-biggest suburban department store of the time.

Lankershim Blvd had the greatest concentration of retail stores, banks, entertainment, and restaurants. It was the heart of North Hollywood. In the late 1950s, most of the original owners were growing old.

Their offspring left North Hollywood to live elsewhere. Many families moved out. Hispanic and black families replaced them. By the 1990s, the region had nearly been completely changed.

In 1997, there was a shootout between police and armed robbers. The two robbers were killed. They injured 12 police officers and eight civilians.

Since then, the community has been developed and gone through many changes. This was mostly because of the development district of 743 acres.

The town currently has a lot of infrastructures. Roads, subways, hospitals, and other emergency services are well equipped and maintained. North Hollywood is well developed, and it will continue to flourish.

There are numerous efficiently working ambulances ready to provide emergency services. There are our post offices distributed around NoHo. They allow for the smooth transfer of parcels and letters.

Transport has also been boosted. The L.A County Transportation department has constructed a subway in North Hollywood.

The educational facilities in North Hollywood are also up to date. There are twelve public schools and ten private schools.

These schools are enough to give a good education to the youth. Education ensures security and a better future for North Hollywood and the United States.

One of the private schools is a center for traumatized children. Penny Lane is a school for children that have been bullied or abused by family members.

When it comes to attractions, North Hollywood has a lot to offer. Some of the best-known attractions include;

1. NoHo is the main center of the Academy of Television Arts and Sciences

The Television Academy is a professional honorary organization. It is focused on the development of the television industry in the US.

It was founded in 1946, and it started the Primetime Emmy Award.  It is bestowed to recognize the excellence in the American Television industry.

2. Another attraction is the Pierce Brother Valhalla, Memorial Park

It is a cemetery with a special area, the ‘Portal of the Folded Wings shrine to aviation.’

It has graves of the many aviation pioneers. Daredevils, barnstormers, and other important architects involved with aviation.

It has memorials to some aviation heroes such as Amelia Earhart and several others. Originally the shrine was built as a gate to Valhalla.

It was called the place of Odin, who was a Norse high god of fallen heroes.

3. The Universal studios are also partly located in North Hollywood

It is built on the border separating Hollywood from NoHo. It is accessible from North Hollywood.

The studio itself has made a big impact on the movie industry. It has more attractions inside the park. There is also a non-paid city walk section.

4. There are also many wonderful restaurants and hotels

Many exotic restaurants will serve good food at affordable prices.

There is Thai food, Mexican restaurants, Latin, Filipino, Japanese and American restaurants. Whether you want Sushi or a burger, this is the place for you to dine in.

5. There also are theaters and art houses distributed all over North Hollywood.

The NoHo arts district has these in abundance.

There are more than 20 theatres that produce classics and new works, art galleries, professional dance studios, and public art.

The district also has the largest concentration of music studios.  The Arts District is experiencing more development, making more of an impact as it grows larger.

There is a long list of bars and clubs to choose from.  With the large movie and music presence, there is no shortage of entertainment in North Hollywood.

If you are not a clubbing person, there are other ways for you to have fun. There are underground theatres and museums for you to visit. You could go to Beverly Hills tours and have fun there.

There are a lot of movie stars, players, and musicians that live in North Hollywood. If you are looking to meet someone or start a career, this is a place you need to visit.

There are several studios and theatres to showcase talent. For those that are into live performances, Visiting NoHo must be on your bucket list.

Some gangs still operate within North Hollywood, although the situation is improving.

There are police working round the clock to keep the residents safe. The gangs have been put down in recent days. The public barely feels their activities.

North Hollywood is an amazing place that has a broad array of cultures. It is a peaceful neighborhood that is growing very fast. As more people move to NoHo, it gets better and better.

The concerns that were there initially about gangs have been addressed. Most of the gangs have been suppressed, and violence is greatly reduced.  This is a place you won’t be worried about your safety.

Whether you are a tourist or you want to move, NoHo should be on your prospects.  There are a lot of attractions to visit and people to see.

If you want to increase your chances of meeting a musician or movie star, North Hollywood is the place to be.