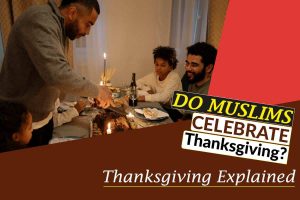 It might seem strange to associate Muslims with thanksgiving. This is because there are many misconceptions about Islam. Most people don’t take the time to learn about Islamic practices, therefore believing in misconceptions.

The act of thanksgiving is one of the most important pillars of Islam. The Qur’an guides Muslims always to show gratitude and give thanks to their maker for any blessings that come their way.

It is for this reason that Muslims always say a thanksgiving prayer throughout. Their prayers start early in the morning when they wake up. They also give thanks for meals and safe journey masses. Does this mean Muslims celebrate thanksgiving?

Here is the answer to your question

Yes, they do. Millions of Muslims in the United States of America celebrate the thanksgiving holiday. Thanksgiving is considered by many as an American tradition as opposed to being a religious event.

They do so by doing acts of kindness to strengthen their faith. Such acts include charitable deeds to the less fortunate. It’s not uncommon to see Muslims donating to charities and feeding street families on the thanksgiving holiday.

Thanksgiving is a religious holiday celebrated every fourth Thursday of November. President Abraham Lincoln first instituted the holiday as a national holiday in the year 1863.

This proclamation came in the midst of the civil war to remember orphans and widows who had lost their families. However, the first Thanksgiving celebration dates back to the 1600s.

The Wampanoag Native Americans and the Plymouth colonists were the first group of people to celebrate thanksgiving. This celebration took place in 1621. The two communities came together to celebrate their first autumn harvest.

Even though the ceremony wasn’t referred to as thanksgiving, it’s regarded as the first Thanksgiving celebration. The tradition was carried on for two more centuries, with each colony and state celebrating separately.

In 1827, an author named Sarah Josepha Hale started a campaign to push for thanksgiving to be made a national holiday. She vigorously steered the campaign for over 36 years, writing countless letters to senators, governors, and presidents.

Her unwavering advocacy for thanksgiving gave her the nickname “mother of thanksgiving.” In 1863, President Abraham Lincoln gave into her claims and proclaimed Thanksgiving to be a holiday celebrated in November.

In 1937, President Franklin D Roosevelt shifted the holiday by a week to improve sales during the great depression. However, his actions were strongly opposed. In 1941, he was forced to sign a bill that instituted the holiday back to its initial date.

Is Thanksgiving Considered A Holy Day?

Pilgrims, who are believed to be the pioneers of thanksgiving, were religious people. In fact, they came to America as refugees from England. Their religious practices were not tolerated in England, forcing them to migrate.

They faced a lot of challenges on their journey, including plagues and unfavorable weather. The few who survived had all the reasons to thank God. However, the first Thanksgiving celebration was not a religious event, and so is modern-day thanksgiving.

The thanksgiving holiday is a state instituted holiday. It is not pegged to a specific religion. The day was set aside for every American to give thanks to their creator for the bounty of life over the preceding years.

Ever since its introduction, the church has adopted Thanksgiving as a religious holiday. People of all religions converge on thanksgiving to spend time with their family and give thanks to their God.

Many families in the United States continue the tradition of celebrating thanksgiving. The ceremony is usually marked by several rituals involving feasting on specific dishes and performing various traditions. So what are some of these traditions?

This is perhaps the standard thanksgiving tradition among families in the USA. Families come together to prepare meals and dine as a unit. Traditional dishes are given a lot of attention during the celebration.

Some of the most commonly consumed dishes include turkey, stuffing, mashed potatoes, and pumpkin pie. These meals are prepared with various from one family to another.

Family members travel from far places to reunite and share these meals. This is why thanksgiving season is the busiest traveling season in America.

Over the years, turkeys have become a symbol of thanksgiving. Over 90 percent of families consume turkeys on thanksgiving. There are no records to prove that turkey was actually served on the first Thanksgiving celebration.

Some researchers argue that the bird gained popularity due to its large size. One bird can adequately feed an entire family. Some communities also come together and organize food drives to feed the needy.

Parades are also a common thanksgiving tradition in cities across America. New yorks Thanksgiving parade is by far the most popular parade. It was started by Macy’s department store in 1924 and has since gained popularity across the world.

Each year the president is gifted two turkeys rescued from slaughter at a state ceremony. He then donates the turkeys to a farm, saving them from being slaughtered.

This ritual has also been performed by various governors as well as local leaders in various states.

Some families also break turkey wishbones as a thanksgiving tradition. A wishbone is a turkey bone located under the breast meat. After a turkey is slaughtered and its breast meat removed, the bone is dried to become brittle.

The contest is performed by having two people hold each end of the bone. Each contestant then makes a wish, and then they start pulling at the bone. Whoever gets the largest piece of the bone gets to have their wish come true.

Families also take part in other games and contests, including board games. Such activities are perceived to be a great source of family bonding experiences.

Christians celebrate Christmas, the birth of Christ, on 25th December. This day is also considered to be a national holiday by many countries all over the world.

Millions of Christian Americans also recognize and take part in this festive celebration. However, Muslims around the world do not celebrate the holiday.

Both Christians and Muslims believe in the Prophet Jesus. However, the prophet is perceived differently between the two religions. Christians believe that he was the son of God who died on the cross and was resurrected.

On the other hand, Muslims don’t believe in Jesus as a crucified messiah but rather as a prophet who died of natural causes. This difference in perception, however, is not the reason why Muslims don’t celebrate Christmas.

Muslims and a sect of Christians believe that Christmas is a pagan celebration that started during the Roman Empire. During the Roman era, the 25th day of December was set aside to celebrate Saturn’s birth, the sun god, and Mithra.

On the other hand, Ahmadi Muslims do not recognize Christmas as a holiday. However, Muslims around the world continue to share in the joy of Christians during the Christmas holiday.

Halloween is celebrated on 31st October. The holiday originated from an ancient Celtic ceremony. It is believed that on Halloween night, spirits of the dead come to hound the living. To scare off the ghosts away, people would wear masks and light-born fires.

Over the years, Halloween has evolved, and so has the way people celebrate it. These days Halloween celebrations are marked with candies, costumes, and decorations.

Many religions, including Islam, do not celebrate Halloween. They associate the holiday with witchcraft and satanic practices.

Muslims do not believe that dead people can be resurrected or have the power to torment the living. To them, Halloween has no spiritual value and should not be celebrated.

They also consider the holiday to be a waste of money that could make this world a better place if put to better use.

Jehovah’s Witness members do not celebrate thanksgiving. This is because they consider the holiday to be secular by all accounts.

Instead of celebrating it, they prefer using the time to further their door-to-door evangelism campaigns. Members of this religious sect do not celebrate birthdays, national or religious holidays.

They only commemorate the death and resurrection of Jesus through Easter and Passover holidays.

Even though Christians and Muslims believe in different supreme beings, the two religions have a lot in common. Thanksgiving is one of the virtues advocated by both religions.

Both Christians and Muslims celebrate thanksgiving. The holiday is largely perceived to be more of a cultural event than a religious holiday. On Thanksgiving, people find time to celebrate and bond with their family and friends.

Previous Article
Is North Hollywood Safe? The Truth About NoHo’s Security
Next Article
What Rockefellers Are Still Alive? The Remnant Of The Greatest Oil Dynasty

What Rockefellers Are Still Alive? The Remnant Of The Greatest Oil Dynasty
Naneth Robinson March 23, 2021