Is African American Hyphenated: A Must-Read 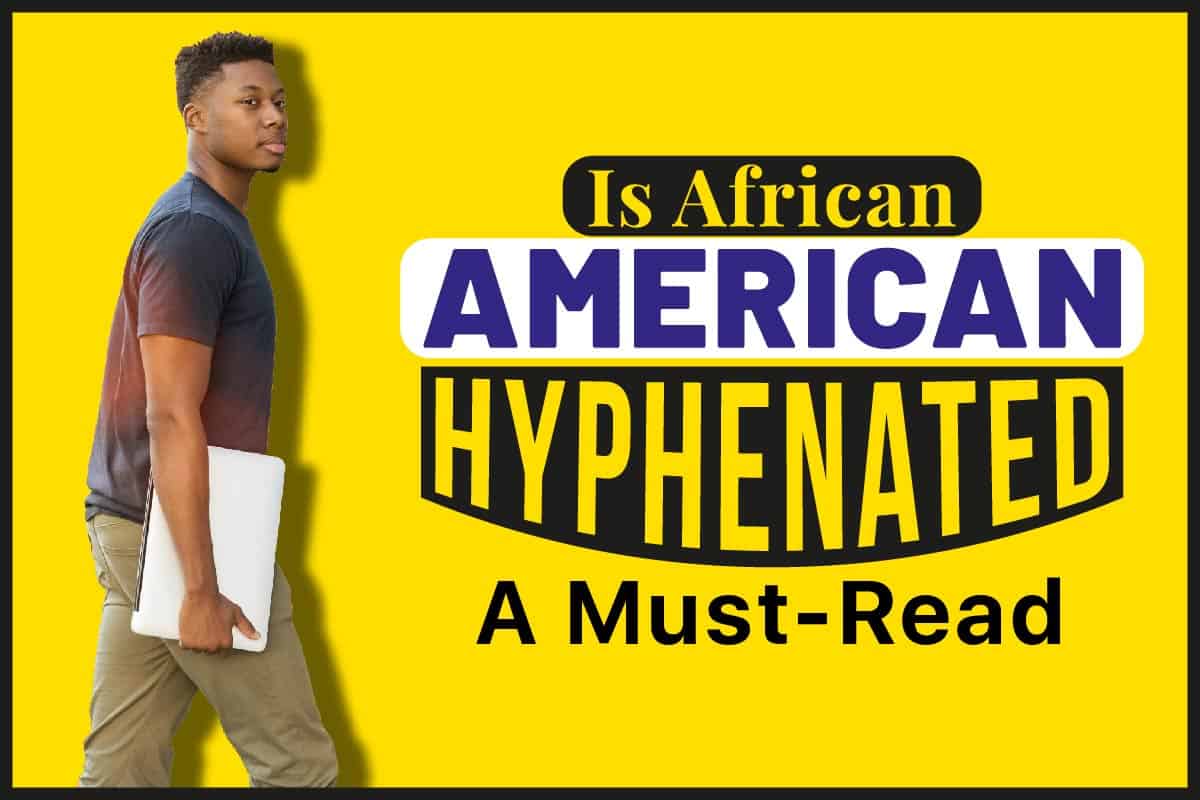 Publishers usually choose how a word should appear. Nevertheless, they still depend on the style guide of language associations.

So, back to your question, is African American hyphenated?

When it comes to how you refer to a person, you address people how they prefer to be. So, this and the style guides come to play when deciding whether to hyphenate African Americans or not.

When Is African American Hyphenated?

“African American” spelled open or hyphenated has generated heated debate over the years. Some people regard the hyphen as bias. But since the hyphen doesn’t improve understanding of the terms, it may be removed unless a publisher needs it.”

Is A Black The Same As African American?

From the history of the United States, black people were regarded as descendants of enslaved Africans. The adoption of the term African American was to signify they were Americans but boost an African heritage.

Racial identity can be personal. Some Americans identify as both, and some prefer Black over African American because they can’t trace their lineage.

There’s no denying that immigration to the U.S. has increased over time. So, people who identify as “Black” were also likely to be first and second-generation immigrants without direct connection to slavery’s history in the country.

In Modern Language Association (MLA) style, if each part of the name of an ethnic or national group is an independent term, it is not hyphenated. This is so, even if it appears as a noun or an adjective. For example, some African Americans live in New York City. She prefers African American literature.

In American Sociological Association (ASA) style guide, one must be specific when using terms that describe an ethnic group or race. You should also avoid stereotypical views about a race or ethnic group. For instance, it’s more specific to use Chinese than Asian.

Furthermore, the ASA style guide doesn’t include a hyphen in “African American.” However, black isn’t capitalized. It also avoids the use of the words: Negro, Afro-American, and Oriental.

Associated Press (AP) Style holds that an African American can refer to an American black person. However, both terms aren’t necessarily interchangeable.

Ohio Wesleyan University Style Guide states that you shouldn’t hyphenate either the noun or adjective. So, both “African American” and “Black” are acceptable.

The editorial style guide recommends hyphenating “African American” when used as an adjective. African American describes a Black American that has African ancestry. Black also describes them, though they are not interchangeable. For instance, people of Caribbean descent refer to themselves as Caribbean Americans.

The NABJ (National Association of Black Journalists) style guide states that you don’t have to hyphenate when using “African American” as adjectives. Not all Black people born outside the United States are African American. It allows a subject’s preference to determine which term to use. When the race is relevant, the person doesn’t state a particular choice, then use black (it’s an accurate description of race).

Don’t use race in police descriptions unless the report is detailed and describes more than the person’s skin color. Focus on using the word “Black” as an adjective, not a noun, in a news copy. Also, use Black people instead of just “Blacks” when referring to a group. However, Blacks are acceptable in headlines.

NABJ also states that when a color describes a race, it should be capitalized. For example, Black community, Brown community, or White community.

About 12 million Africans were slaves to the Americas (from 1500 to 1860s). It is the largest forced migration in human history. Also, the majority of the enslaved were in South America and the Caribbean. Others were in North America. Africans outnumbered Europeans in developing cities like Mexico City, Havana, and Lima, in the mid-1600s.

European vessels sailed to Africa, where they exchanged goods for slaves. After that, the ships sailed to the Americas to trade slaves for agricultural products. Such products came by slave labor.

However, the journey between Africa and the Americas took several weeks and sometimes months. Africans were forced to make the journey naked, chained, crowded, and in an extremely dirty state. This resulted in the death of about 1.5 to 2 million people along the way.

More than 40 percent of Africans came into America through Charleston, South Carolina (the center of the U.S. slave trade). They worked on plantations cultivating cash crops like rice and tobacco. Some escaped and started their communities before and during the American Revolution.

Furthermore, African Americans have always risked a lot for freedom. Even though Southern states made life difficult for them, more blacks lived there than in Northern states. Slavery got abolished at the end of the civil war in 1865.

Although they got liberated, they were still like second-class citizens due to white supremacy. Therefore, only white citizens who owned property were allowed to vote.

The conditions they faced improved over time. And they became more involved in politics over time. But some African Americans still feel discriminated against.

Myths About The History Of African Americans

The bodies and labor of the enslaved people were the capital that fueled the country’s founding and wealth. Furthermore, many of them earned money from overworking and hiring themselves out.

Black revolutionary soldiers did not fight out of love for a country that enslaved and maltreated them. They were fighting for freedom and not for America. They fought for themselves and the race as a whole.

Black people in the early period of racial segregation didn’t fight back:

African Americans faced continuous threats by white mobs. Also, they faced unpunished attacks by individuals and police brutality in the early period of racial segregation in the United States of America. But then, how they responded to this is a myth.

Some Black people made legalistic appeals to convince police and civic leaders about their rights and that they should be protected. Others prepared themselves for the abuse they expected and fought back.

African Americans were enslaved until emancipation:

One of the biggest myths about the history of Black people in America is that all were enslaved until the Juneteenth Day.

In reality, free Black communities existed in states like Louisiana, Maryland, Virginia, and Ohio well before abolition. Some people became free upon the death of their enslavers and families.

Americans who are descendants of Africans always reviewed their identity in their struggle for equality. They were known as African, Negro, colored, Afro-American, Black and African American at different times in the United States history.

The portion of African American population that is sole of African ancestry is not known. Over the years, there have been diverse racial mixtures between people who descended from African and those of other racial backgrounds.

From African American history, the slaves referred to themselves as Africans. But slave masters gave them English names referred to as Negroes (the Portuguese word for black). Some Blacks hated the term and saw it as degrading, most especially when Whites mispronounced it. So, they preferred “colored” when they got freed.

During the migration to the North for factory jobs, Negro became acceptable. Also, Civil rights activists used “Afro-American” to describe pride in their ancestral homeland. But Black was more popular. All these terms are still shown in the names of many organizations.

In the late 1980s, Rev. Jesse Jackson led a movement. It was to propose that Blacks should be called African American. Unlike some of the other terms that were labeled color, it shows kinship with a historical homeland.

For now, Black doesn’t seem to be as offensive as “Negro” and “colored” were. Instead, there is a feeling that “African American” can sometimes show a significance that “Black” cannot. So, the terms Black and African American are both widely used in the 21st century.

It can be a bit confusing to know when to hyphenate “African American” or not. The reason is because referring to a race or ethnic group can be very sensitive.

You can use writing style guides when choosing how to describe a race. But, also consider the preference of the person or group that you’re referring to. Most people may want you to hyphenate the African Americans while others may not.

Previous Article
How Often Does Google Update Street View? Things You Need To Know
Next Article
How Does Latitude Affect Climate: A Must-Read For Everyone

How Does Latitude Affect Climate: A Must-Read For Everyone
Naneth Robinson April 19, 2021