Can You Be Arrested For Hate Speech? What Many Don’t Know 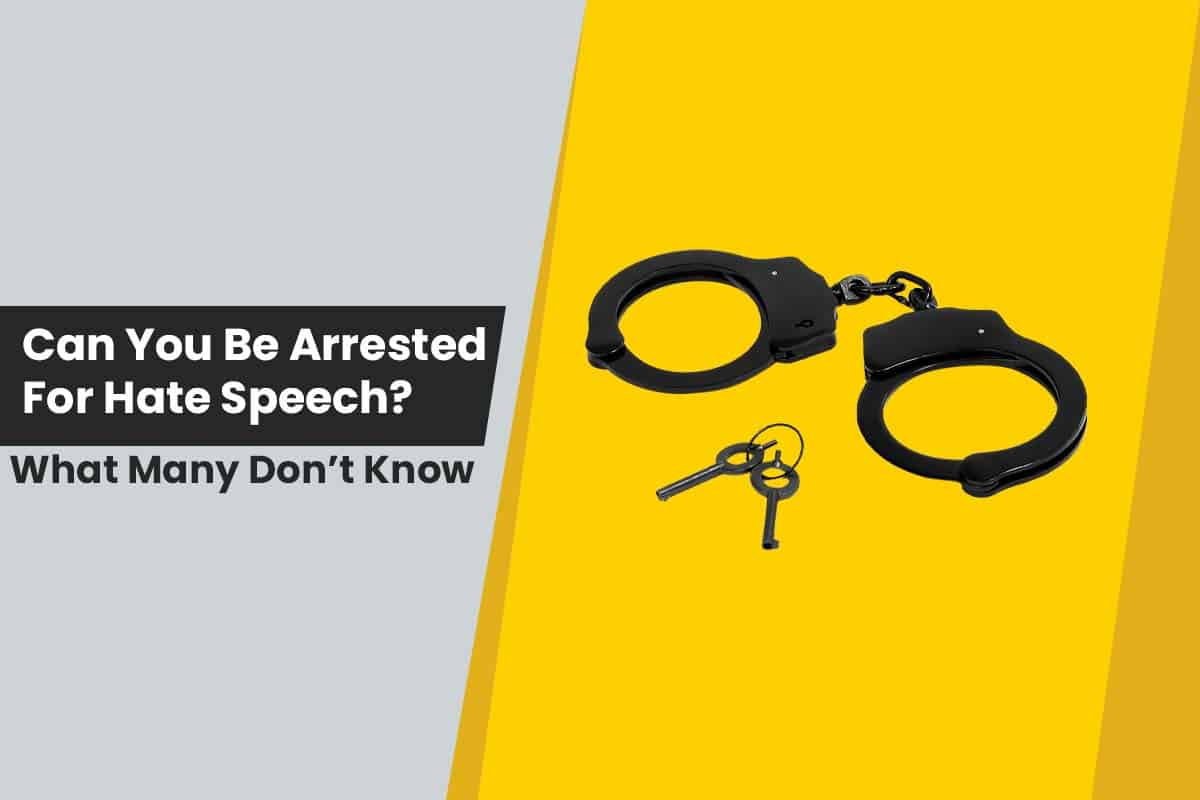 Hate speech has become a serious issue in society. But despite the threat it poses, many countries let hate speech slide.

Laws in the United States of America, the United Kingdom, and other parts of the world differ. How each country reacts to hate speech differs too.

In most countries, hate speech is a serious crime. It’s even more serious when it involves top government officials, prominent individuals, or a country.

Can you be arrested for hate speech in the United States of America?

Yes and no. That’s the answer to this question. The truth of the matter is hate speech isn’t clearly defined. And there are hate speech protected by the First Amendment.

For instance, if you insult the president or claim lawmakers aren’t mentally sound or are too biased to rule the country, no one would get you arrested.

However, if you threaten to eliminate the president, commit a crime, use speech that incites violence, terrorism, or vandalism, you could get arrested.

Hate speech is a broad subject, so keep reading for more revelation on the topic.

What Is Hate Speech?

One of the fundamental human rights is freedom of speech. Everyone has the right to speak or express themselves without constraint, censorship, or legal penalty.

However, hate speech is defined as a form of communication, whether in speech, behavior, or writing, that attacks or uses discriminatory languages on an individual or group of persons because of their nationality, religion, sexual orientation, age, ethnicity, skin color, or social position.

Hate speech and hate crime seeks to achieve the same thing. Both are used to hurt a person, group of persons, or organization. Hate speech is also viewed as a more serious form of hate crime.

Hate Speech And Hate Crime: What Is The Difference?

First, what’s a hate crime? Hate crime involves targeting people due to their perceived or real affiliation to a certain group or organization.

There’s a difference between hate speech and hate crime. According to the definition, hate speech is regarded as a controversial term. It’s a speech intended to incite violence, intimidate or degrade an individual or group, based on several factors. Hate speech can also be oral or written communication.

Hate Speech The First Amendment Does Not Protect

Several years of litigation has helped to for the First Amendment. So there are hate speech protected by law. You won’t get arrested by using those words.

It’s important to note that others have rights the same way you do. It’s also in your best interest to know that not all hate speech is considered legal and protected by the first amendment.

Threatening, harassing, or violating other people’s rights can land you in big trouble. It could either be by written or oral communication. The first amendment won’t protect you against the punishment that comes with the use of such speech.

This section explains hate speech the First Amendment does not protect.

Hate speech that involves intimidation or threats can get you arrested. Someone in the U.S. can’t post a bomb threat on social media and expect to go scot-free. Whether you’re a citizen or not, security agents would find and they would persecute you.

This also applies to threats. The U.S. Supreme Court defines a threat as a statement where an individual expresses a desire or intent to commit a violent or unlawful act against a person or group of people.

It doesn’t matter whether you mean what you said or not. As long as you have issued a threat, you could get arrested. Again, should anything happen to the individual you had threatened, you’ll automatically become a prime suspect.

So, true threats and intimidation could be serious crimes. But law enforcement agents and the court, still places more emphasis on the speaker’s seriousness.

However, hyperbolic expressions are not considered a crime, neither are they punishable by law. An example is finding someone in possession of a photo depicting the POTUS’s head. Finding a gamer yelling, “I’ll kill you,” is not a true threat or intimidation. So, intent matters when persecuting offenders of true threats.

Incitement is another hate speech, considered a crime. You could go to jail for using such words, particularly when it leads to violence or lawlessness.

Incitement has led to civic unrest in many countries. It has also led to ethnic clashes and unrest that claimed numerous lives and properties.

Incitement does not have protected status. So think twice before making inciting comments. If your comments, either on social media, phone call, or via text message, leads to unrest, violence, or lawlessness in the land, you could be arrested.

The truth is most incitements lead to heavy protests and a breakdown of law and order. They can cause serious chaos in the land, leading to disunity.

So incitement is another hate speech that the First Amendment does not protect. Therefore, if you use such speech, you could get arrested.

Fighting words also fall into the group of hate speech unworthy of the First Amendment’s protection. It’s referred to as words that can make the individual addressed, react violently or commit an act of violence.

The U.S. Supreme Court classifies fighting words as utterances that can lead to a breach of peace. An example is when a driver starts arguing with a police officer on duty and uses fighting words like “you’re a dammed fascist.”

Most police officers may keep calm upon hearing such words, but others may react. Individuals may also use fighting words against themselves. It doesn’t always have to be between a law enforcement agent and a normal citizen.

Defamation is another hate speech that the First Amendment does not protect. It refers to a false oral or written statement about an individual that tarnishes the person’s reputation in question. It can also involve an organization or group of people.

Several litigations, due to defamation, are taken to the courtroom every year. The plaintiffs are majorly businessmen, celebrities, or politicians, who know the damage that a defamatory word can have on their careers and personal lives.

However, in the past, judgments on defamatory cases don’t usually go the plaintiffs’ way. The only way that such happens is if the plaintiff can prove that the media house or individual in question knew the truth but chose to ignore it.

Another way judgment can go the plaintiff’s way in a defamation case is to prove how the defamatory statement affected his or her finances.

The First Amendment does not protect against child pornography. And by the way, no one expects it to. Child pornography refers to visuals showing under-aged children (below 18 years) having sexual intercourse or displaying their genitals.

Having child pornography materials is also outlawed. It’s a crime, and one could get arrested for it.

The Dangers Of Hate Speech

Can we separate hate speech from violence? Unfortunately, it’s not possible. There’s a dangerous link between both.

Hate speech is not the best in a democratic setting. It also poses a grave danger to the rule of law and fundamental human rights.

The dangers of hate speech are broad and grossly misunderstood. Otherwise, those who commit such crimes would have second thoughts before making any utterances.

Hate speech can lead to deep depression or serious psychological repercussions. It can also lead to unrest and lawlessness that can cause millions of deaths and loss of properties.

Growth in social media is a blessing to humankind. These platforms have made communication pocket-friendly, fast and easier. But on the flip side, it has given rise to the use of hate speech. Many offenders even go unpunished.

The government and social media companies need to work hand-in-hand to address hate speech. The platforms should make it easier for the government to identify and punish offenders. Doing so will serve as a deterrent to others having the mind of committing such a crime.

Can you be arrested for hate speech? Well, it all depends on the type of speech. If the First Amendment protects the speech, chances are you won’t be arrested. But if it’s not protected, you could get arrested.

Contrary to what many believe, there’s freedom of speech However, the use of certain words is considered a crime. Not all words are protected by the First Amendment. So learn words protected and not protected to avoid utterances that could land you in trouble. For instance, you cannot issue a bomb threat and expert law enforcement agents to fold their arms.

Previous Article
Is Black The Absence Of Color, Or Is White? Mystery Solved
Next Article
How Common Is Prison Rape? This Revelation Would Startle You

How Common Is Prison Rape? This Revelation Would Startle You
Naneth Robinson February 20, 2021