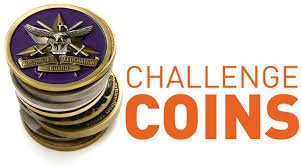 Every collectible item inevitably becomes a traded commodity. It’s no surprise that people originally referred to Baseball cards as trading cards. With challenge coins becoming such a popular collector’s item, they have also become an item that is often sought after for trading purposes. If you have developed a fondness for challenge coins and want to make a little side income from your hobby, here is a brief guide to help you succeed.

You might think of challenge coins as mainly a military item, but they come in many forms and are used by many groups. They are usually a small medallion or coin that is carried by organization members to prove their affiliation. Organization members like to show these coins to prove their allegiance and create higher morale among comrades. Military and law enforcement workers tend to be the most avid collectors of this memorabilia.

Challenge coins come in many forms. They are often round and about the size of a Morgan silver dollar. However, they come in many other shapes such as shields and hexagons.

The origin of challenge coins has roots in ancient Rome, although they were not referred to as challenge coins. Roman legion soldiers were often given special coins for exemplary performance in battle. The coins bore the insignia of their legion. However, it wasn’t until World War I that the first challenge coins were used and referred to by that term.

Being successful as a challenge coin trader

In the pursuit of becoming a challenge coin collector, it’s common for enthusiasts to try and “catch them all,” as the popular Japanese anime cartoon slogan goes. However, you should avoid this mentality, and focus on several specific items that are most likely to have high demand and bring in profit.

It’s nice to have a highly valuable collection and show it off, but this pursuit doesn’t align with the goal of making profits. It’s more important to find items that are likely to yield some kind of return when it is sold, even if it’s not a particularly high-value coin.

When looking for coins, don’t rely only on trade shows. These are not the best places to trade because the prices there don’t allow much opportunity for profits. It pays to explore outside of familiar territory and try to find people who share your passion for the hobby.

As your collection grows, make sure to keep it organized. It’s important to set aside which coins you are more likely to trade. An organized collection also helps traders avoid mistakes that put them on the losing end of a deal.

As a challenge coin trader and collector, it pays to have a plan. Avoid impulsive decisions based on momentary greed. Set some rules that will help you stick with an effective strategy. If your strategy doesn’t pan out at first, you can always revise it as time goes by.