Who Paid For McCain’s Funeral? Here’s What We Know 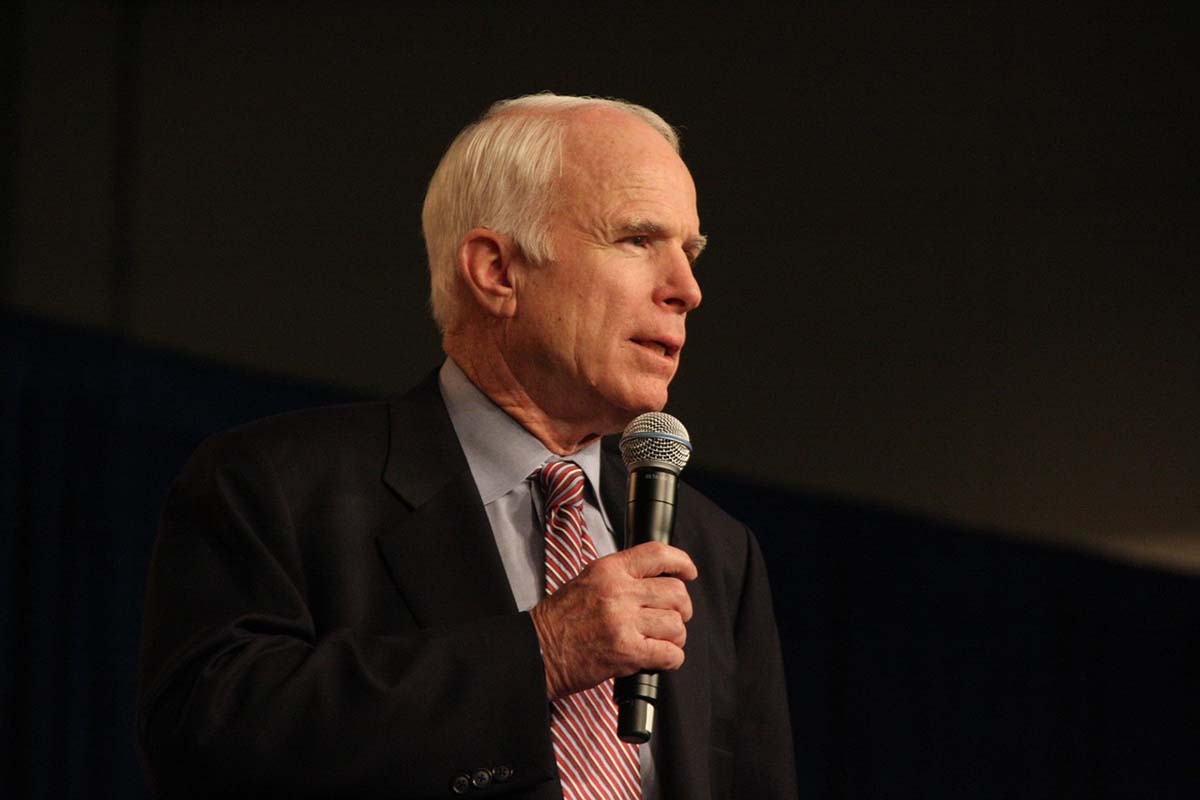 Senator John McCain, a hero, is gone! Families, friends, and the U.S. as a whole would forever miss him.

He was an elder statesman, one who detested the abuse of power. McCain served in the U.S. Navy, house of representative and Senate. He was a courageous Navy aviator, fought in the Vietnam War, and was a war prisoner.

John McCain represented the state of Arizona in the upper chamber for 31 years. He also contested for the POTUS and lost.

After battling brain cancer for a year, the former senator and presidential aspirant finally gave up the ghost on 25 August 2018.

McCain got a befitting burial that lasted for five days. But many people are concerned about how such an expensive funeral got founded.

So, who paid for McCain’s funeral?

John McCain’s funeral was a private one. In attendance were former presidents, vice presidents, several heads of government agencies, senators, house representatives, and top dignitaries. So the funeral would surely be an expensive one.

However, McCain himself and his family aren’t poor. His wife is stinking rich and can fund her husband’s funeral herself. The government did assist in various areas. But, there were expenses the family catered for themselves.

McCain had a funeral fitting for a notable personality. He served his country honorably, so we expect the government to reciprocate the honor. And yes, they did. In over 166 years, John McCain became the 31st person in the country to lie in state.

What sparked a reaction regarding McCain’s burial was Mr. Trump’s claim he approved the former senator’s funeral. But in reality, the late Arizona Senator’s family does not require his approval for the funeral.

Keep reading to know how the government had a hand in McCain’s funeral.

Air force II transported Sen. John McCain’s corpse from Arizona to Washington DC. And according to the POTUS, Donald Trump, he authorized it.

The plane McCain’s casket traveled in is reserved for VIPs and the United State’s vice president. But it’s under the POTUS’ control.

Again, at Joint Base Andrews, the POTUS has the power to authorize departures and arrivals. The plane carrying the late senator arrived and departed from this base, a facility owned by the U.S. Air force.

So as regards the transportation of McCain’s remains, the government played a big role. They fueled the airplane that transported the late senator. The family didn’t have to pay.

The airplane’s use, including the base it landed and departed, all needed the president’s authorization. And President Donald Trump didn’t hesitate to give his approval. But besides transportation, what else did the U.S. government do?

McCain’s memorial service held at the National Cathedral and eulogies delivered gave attendees room to reflect on the country’s state. It had in attendance three former presidents and top political personalities in the country.

Was the government’s approval needed for the family to use the National Cathedral for McCain’s burial? The answer is no.

The then National Cathedral’s chief communications officer, Kevin Eckstrom, said in a statement that only state funerals involving a former president require the government’s approval. He further stressed only a deceased person’s family could organize funerals and memorial services. And the government doesn’t have to approve the cathedral’s use.

McCain wasn’t a former president. So it was clear government officials, or the president’s approval doesn’t count. This also means the government didn’t sponsor the funeral service at the National Cathedral.

However, the government didn’t sponsor or didn’t have to approve the memorial service doesn’t mean they didn’t play any major role when McCain’s casket arrived in Washington DC.

The government owns and controls security agencies in the country, and their presence was crucial as the late senator’s casket traveled across the street of Washington DC. The police and U.S. Secret Service oversaw the road closures to enable the funeral procession to continue smoothly.

McCain Lied In State In The Rotunda.

McCain merited the honor and respect he got during his funeral. He was the 31st person in the country to lie in state in over 166 years.

John McCain lied in state for three days in the U.S. Capitol, an honor only distinguished citizens get. Again, the government’s approval isn’t necessary. Approval is subject to the House of Representatives and Senators.

The decision to accord McCain such an honor got announced by Paul Ryan, the then Speaker, and Mitch McConnell, Senate Majority Leader. They also consulted Sen. Chuck Schumer and Rep. Nancy Pelosi, two prominent Congressional Democrats.

While at the Rotunda of the U.S. Capitol, Americans had the privilege to pay their last respects to the hero and elder statesman. Again, this doesn’t require the president or any government official’s approval. If the family desires it, then it will be subject to Congress’ approval.

McCain’s Appeal for Two Former Presidents To Speak at his funeral Honored.

Before McCain’s demise, he appealed to the former president, George W. Bush, and Barack Obama, to deliver eulogies at his funeral service in Washington.

Shockingly, both former presidents belong to a rival party, the Democrats. But McCain’s request for them to speak at his funeral tells a lot of his personality.

For the record, the late senator contested against both presidents, George W. Bush and Barack Obama, for the POTUS but never won. But that didn’t tarnish the respect he had for both men. Requesting them to deliver eulogies at his funeral service proves that.

As expected, both former presidents spoke highly of the late senator while delivering their speeches, with George W. Bush calling him a patriot of the highest order.

McCain’s burial had come and gone. But one thing the world and Mr. Trump will never forget is how McCain’s family treated the POTUS. He wasn’t invited to the funeral.

The best Mr. Trump could do was post a series of tweets to share his condolences with the late Arizona Republican senator’s family. Besides the tweets, he, Trump, never released any official statement.

However, it was evident that Trump was the only one from the White House barred from attending the funeral service. His daughter, Ivanka Trump, and husband, Jared Kushner, both attended the ceremony. And so did other top government officials from the White House.

So, why was Mr. Trump not invited to McCain’s funeral despite both being Republicans?

First, his wife, Cindy McCain, claimed she didn’t invite Mr. Trump because she desired to keep the funeral ‘with dignity.’ It was clear that inviting the POTUS, Donald Trump, would allow the funeral to be politicized.

Unfortunately, Cindy McCain’s claim wasn’t the only main reason the president wasn’t invited. McCain requested his family not include Mr. Trump on the guest list.

What did Mr. Trump do to McCain for the late senator that he requested his family not to invite the POTUS?

Well, Trump and McCain’s rift started in 2015. It was at the Family Leadership Summit. According to Trump, McCain wasn’t worthy of the name “war hero” because he was captured and held in a Vietnam prison for five years.

Trump claimed he likes those who don’t end up getting captured. He said he would prefer calling those war heroes over McCain. This comment must have angered the six-term Arizona Republican senator. And that could be the reason he requested the exclusion of Trump’s name from his funeral’s guest list.

McCain’s journey on planet earth and the United States of America might have ended. But his legacies during the war in Vietnam, Afghanistan, and in Congress still live on.

McCain look destined to be in the U.S. Navy from the onset. His family history proves that he came from a lineage blessed with Navy admirals. His biological father and grandfather served honorably in the Navy.

In 1958, McCain got admitted into the Naval Academy in Annapolis, where he became a naval aviator upon graduation. He retired from the United States Navy as a captain in 1958.

McCain’s grave was next to Adm. Chuck Larson, his old friend, overlooking the Severn River. And being a retired naval officer, McCain’s family didn’t require any approval from the president to bury him at the Naval Academy in Annapolis.

At this point, you should know who paid for McCain’s funeral. The government did sponsor several aspects like the transportation of the late senator’s remains via Air force II, motorcade parade, and law enforcement agents’ activities, maintaining law and order. But his family financed a large chunk of the funeral service.

McCain’s wife is well to do. So, she can sponsor the entire funeral service without breaking a sweat. McCain was a top government official and someone who served the country honorably. So the government needed to get involved in his funeral one way or the other.

Previous Article
Is Naruto The Last Canon? Know The Plain Truth
Next Article
Is The CIA Watching Me? It’s Time To Know The Truth

Is The CIA Watching Me? It’s Time To Know The Truth
Naneth Robinson January 31, 2021 How To Identify Misconfiguration And Compliance Issues In Your Cloud Service?
Technology How To Unlock Frigidaire Dishwasher: A Simple And Easy Guide
News, Technology Can You Use Parchment Paper On The Grill?
Lifestyle 11 Breathtaking Places To Visit Before You Die!
News

Upgrade Your Style With 5 Simple Tips
Fashion
Made with coffee & love by ThemeBubble ©All rights reservd.