What Is The Presidential Medal Of Freedom? 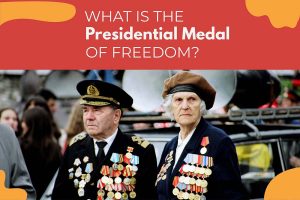 What makes the United States of America so great? It’s the security, rich culture, patriots, and innovators. This causes a good rate of development and peace.

Most of these actions are done by Civilians. This is the origin of the Presidential Medal of Freedom. It is an award for the civilians that make big contributions to the USA’s greatness.

It is the greatest honor a civilian could receive. It is not limited to American citizens. It has a lot of benefits that have made it remain relevant since John F. Kennedy initiated it.

What is the Presidential Medal of Freedom?

The Presidential Medal of Freedom is a way to honor those that have served humanity well. It is a great honor that any civilian would be grateful to get.

It instills patriotism and love for the country. The award encourages more effort in those that want to receive it. It is a part of why America is so great.

When Was The Presidential Medal Of Freedom Initiated?

Awarding civilians with this Medal is a tradition that all presidents of the United States uphold. President John Kennedy first awarded the award.

Initially, there was the Medal of Freedom. Any of the three Ministers gave this. President Harry Truman founded it in the year 1945.

Its aim was to honor the role played by civilians in World War II. This would explain why it was founded two months after the end of the Second World War

President John F. Kennedy founded the Presidential Medal of freedom in 1963. This was a more up-to-date award, and it was more prestigious than the Medal of Freedom.

The president himself could only present this award. This made it a bigger deal than the Medal of Freedom. This was the first civilian neck decoration in the United States.

How Are Nominees Selected To Receive The Medal?

Over the years, different presidents have awarded a lot of people with this prestigious Medal. The nominees are random, and the criteria of selection may be a mystery to many.

Some of the most known recipients include Bill Clinton, Mohammad Ali, Steven Spielberg, and Bob Dylan. They are all in different fields, and they don’t point to any particular pattern.

The general criteria used the following;

This can be awarded to civilian or military personnel or police officer. This can be for many different actions that directly or indirectly kept fellow Americans safe.

For Instance, US general Tommy Franks was awarded the Presidential Medal of Freedom in 2004. This was a military general that did a lot to keep Americans safe.

Protecting American interests in foreign states could also get you this award. Paul Bremer, who was a diplomat, received the Medal in 2004.

The United States is big on making attempts to achieve world peace. It is, therefore, obvious that civilians who make a step in the direction will get awarded.

Anyone in their capacity can do this. If their efforts make a noticeable enough impact, then they could be given this award.

It doesn’t have to be an American citizen. This is a global award for any person who makes a positive impact on the human race.

Nelson Mandela was awarded the Presidential Medal of freedom in 2002. He was not an American, but he was one of the best rulers on this planet. He was the South African President.

Humans natural are built to be curious about where they come from. Cultures are what define a people, and Americans are no different.

The Presidential Medal of Freedom can be awarded to scholars or historians. These are people who do researches that are vital in the preservation of the American culture and History.

Even television reporters and other public figures get nominated. In 2002, Fred Rogers received the Medal. He was a host for a children’s TV show.

Jacques Barzun was a writer and historian. He also got a Presidential Medal of freedom. Irving Kristol was also a recipient of this Medal. She was an author and editor.

The Presidential Medal of Freedom can be given for incredible personal achievements. These accomplishments could have been of benefit to the state in one way or the other.

Sportsmen, athletes, scientists, and writers all get recognized for this award. Mohammed Ali is probably the best boxer to ever walk this earth.

Who Was The First Person To Receive The Medal Of Freedom?

The first American to receive the Medal of Freedom was Anna Rosenberg on 29th October 1945. It was given to her by Robert P. Patterson, who was the Secretary of War.

She was recommended for the award by General Dwight Eisenhower. He would, later on, become President Eisenhower.

Anna was an immigrant. She was born in Budapest in 1902. She migrated to New York in 1912 together with her family. He officially became an American citizen in 1919.

She was the regional manager of the Social Security Board during its starting years. She was a special and important envoy to Europe during World War II.

It is her role in World War II that got her to be nominated. She got some very important information during her time as a spy. Were it not for the Medal of Freedom; this World War II legend could have been forgotten.

Has Anyone Ever Declined The Presidential Medal Of Freedom?

America is a free country. Over the years, some musicians and athletes have turned on awards that were offered to them. This has also happened with the presidential Medal of Freedom.

Bill Belichick is one of the latest to reject this honor. He was the New England Patriots coach at the time of the offer. This was the most public rejection, but there were others before it.

Moe Berge turned down the Medal from President Harry S. Truman in1964. He was a spy during World War II. He refused the Medal, saying that his ‘humble contribution’ should not be divulged.

Jacqueline refused the Medal, saying that her late husband should be the focal point of honor and not her.

President Harry S. Truman also rejected a Medal. The former president blocked an attempt by the House of Representatives to give him the Medal in 1971.

He wrote a letter to Congress saying,’ I do not consider that I have done anything which should be the reason of any reward, Congressional or otherwise.’

Most of the people that rejected the award did so with good intentions. They were not against the system; most were just humble people who didn’t want to be rewarded for their noble actions.

How Do Presidents Pick People To Award?

The selection of honors can say a lot about the president’s policies. Most would pick people that took actions that are somehow relating to their policies.

Do you have to be an American citizen to get a Presidential Medal of Freedom?

No. You don’t have to be an American citizen. Some foreigners have received the Medal. Even if you are a foreigner, you are legible for the Medal as long as you make a big enough impact.

No. They are almost similar in that they are both intended for outstanding civilians. But they are different.

Is it a crime to turn down the Presidential Medal of Freedom?

No, it is not. In as much as the Medal is a big deal, America is still a free country. If it is offered to you and you want to turn it down, feel free to do so.

What is the Presidential Medal of Freedom?

It is an award that the United States president gives.

It is given to a civilian to recognize those that have made a big contribution toward world peace, national security, culture, and other important national or private endeavors.

The Presidential Medal of freedom has become very coveted. Since its founding by President John F. Kennedy in 1945. It has been used to appreciate those who put the needs of the many ahead of their own.

As days move on, more and more people get this award. People in many different fields receive this award for their achievements.

Even some foreign leaders such as Nelson Mandela of South Africa have received this recognition.

All our heroes must be remembered and honored. It is why the Presidential Medal of freedom will continue to be a rare and coveted award.

Previous Article
Libertarian And Republican: Against Or With Each Other?
Next Article
What Time Does Burger King Serve Lunch?