Pardon Vs. Amnesty: What You Need To Know 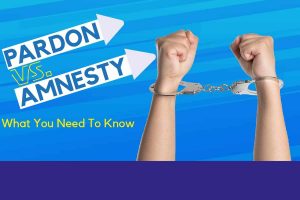 Pardon and amnesty are two popular words. Unfortunately, most people use them interchangeably.

Pardon and amnesty are called clemency powers. These powers are mostly possessed by the head of state, the executive arm of government.

In this case, we are referring to the presidential system of government. These clemency powers also extend to state governors.

In this post, the aim is to discuss pardon and amnesty. After reading, you’ll understand the differences, including when to use both terms. Keep reading!

Pardon is the government’s decision to forgive a person of all or some of a crime’s punishment. It exempts a person from the results of his criminal conviction. The power to pardon is the right of the people; they vest this power on whoever they vote in.

State constitutions usually point out where the pardoning power lies. The decision to grant or deny pardon rests on the executive. This may be a state governor or the President. The decision is final, and the judiciary does not review it.

This is also called unconditional pardon or full pardon. Its pardon granted a wrongdoer to relieve the individual of any punishment and restore their civil rights without conditions or restrictions. However, it does not remove the conviction from the person’s criminal record. For instance, Gerald Ford granted pardon to Richard Nixon after he resigned from the presidency. It absolved his punishment for the Watergate scandal.

This is the exemption of an offender from the legal punishment of his offenses if he satisfies a necessary condition. For example, a man robbed a bank, and he was given a 16 years jail sentence. This kind of person can get a conditional pardon. But the pardon can only become effective after helping the authority to locate the robbery mastermind. Also, he must not break any law, or his pardon will become void, and he will return to prison.

What A Pardon Does And Doesn’t

A pardon doesn’t show that the person is innocent. It doesn’t clear the convictions. It only restores a person’s civil right.

A pardon doesn’t change the civil results of the crime. For example, if someone who committed murder receives a pardon, they may still go through a lawsuit for wrongful death. Pardons usually do not affect administrative consequences, like license suspensions.

Amnesty is when the government allows criminal or political offenders (a group or class of people) to go scot-free. The crimes are usually political. Amnesty is also traditionally given with the condition of obedience to the law within a certain period.

Amnesty is usually granted to a group of people that committed crimes against the state. Such offenses may include illegal immigration, treason, or deserting the army. However, it does not give anyone the right to commit future crimes. Also, it does not pardon crimes that are yet to be committed.

An amnesty does not condone nor clear a criminal offense, but it only gives room for political reconciliation.

Weapon amnesties are usually granted so that people can hand in weapons to the police. It goes without any legal questioning as to where they got them or why they had them. After a civil war, the government may decide to grant mass amnesty to absolve everyone in the war. Amnesties are usually applied before any prosecution for the crime.

This is when institutions or perpetrators grant themselves and their members an amnesty. The reason is to prevent all forms of investigations and prosecutions. It’s often done at the beginning of a new political era.

This is an amnesty for a large number of people and offenses. But it does not require the beneficiary to meet any conditions before enjoying the amnesty. An example is an amnesty for illegal immigration into the United States.

This requires an offender to satisfy some conditions before he is given an amnesty. For instance, he may need to provide a confession.

This is granted by a law, decree, and regulation that do not clearly state civil actions or prosecutions but have the same effect.

How To Obtain A Presidential Pardon

Article II of the U.S. Constitution gives the President the power to grant pardon to people who have committed federal offenses.

The President can pardon a person for nearly any offense against the United States. But, the power isn’t unlimited. For instance, the President cannot grant a pardon in cases of impeachment.

To request a pardon, you have to submit a formal application to the Office of the Pardon Attorney. The office of pardon evaluates the basis of each request and considers different factors. It may include the person’s conduct after the conviction and how severe the offense is.

However, the President may choose to skip the Pardon Attorney and issue a pardon without any recommendation from the Department of Justice.

Benefits Of A Pardon

If you’re convicted of a crime, you will lose your right to own a gun, vote, get a passport, serve on a jury, and hold public office. When you are granted a pardon, these rights are restored. It will enable you to participate as a member of your community.

Provides official confirmation that you are law-abiding:

A pardon will not clear your criminal record. However, it acknowledges that you have worked diligently to become a productive, law-abiding member of your society. Also, you can be admitted to a professional school or take the Civil Service Examination.

Ability to get employed easily:

One of the most important benefits of a pardon is the ease of securing a job. Employers don’t easily hire a convicted felon, but they will consider you when you’re granted a pardon.

Disadvantages Of A Pardon

Benefits Of An Amnesty

It is useful when a large number of violators are involved. The cost of prosecuting a large number of people is high. Hence, granting them amnesty will prevent this cost and help them give up their violations.

Prompts an offender to come forth willingly:

When violators are granted amnesty, they willingly come forward. They easily surrender arms or confess crimes, as the case may be.

Amnesty reconciles offenders and society. It creates an avenue to live in a peaceful community.

Disadvantages Of An Amnesty

Differences Between Amnesty And Pardon

A pardon is granted to only individuals, while amnesty is granted to a group of people. Amnesty is mainly given in political situations to address some issues that are of national importance.

In pardons, the criminal records of the person are not cleared. It’s because he has already been convicted in court.

Previous Article
How Does Latitude Affect Climate: A Must-Read For Everyone
Next Article
How To Catch Your Boyfriend On Snapchat By Hacking Into His Account

How To Catch Your Boyfriend On Snapchat By Hacking Into His Account
Naneth Robinson August 25, 2021